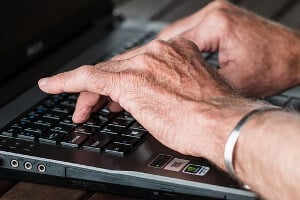 Carpal tunnel syndrome (CTS) is one of the most common repetitive stress injuries afflicting the workforce. It affects around four per cent of working adults each year and the injury can not only cause discomfort and pain, but can limit mobility and severely hamper productivity. There are a number of treatment strategies, including the use of a wrist brace for carpal tunnel syndrome. As mentioned below, using a carpal tunnel wrist brace may reduce the likelihood of more invasive approaches later on.

There are several options for the relief and treatment of carpal tunnel syndrome.The American Academy of Neurology recommends the use of non invasive strategies, such as using a carpal tunnel wrist brace, in the early stages of the condition.

Most doctors suggest a carpal tunnel splint or brace to help relieve the symptoms of the condition. An effective wrist brace for carpal tunnel syndrome will provide proper support and immobilizes the joint. Your wrist’s natural position is actually a slightly backward bend at an angle of about thirty degrees. A good carpal tunnel wrist brace should allow you to maintain this wrist position with little or no discomfort, thus taking the pressure off the median nerve. A patient will normally wear a carpal tunnel wrist brace at night as this is when the wrist is most at risk of being in a vulnerable position. A wrist splint keeps your wrists straight, avoiding pressure on your nerve.

Carpal tunnel wrist wraps provide support similar that described above for a wrist brace. However, they will also provide a degree of flexibility for your wrist. Compression wraps and athletic tape help the wrist stay in a natural, healthy position and are most effective for individuals who work jobs with repetitive hand and wrist motion, such as typing or assembly line roles. Once again, these supports reduce the pressure on the median nerve, allowing the wrist to be free of inflammation and pain.

Hot and cold therapy can reduce carpal tunnel pain and swelling. There are also carpal tunnel wrist supports that can both reinforce/support the joint and provide hot/cold therapy. Heat therapy in particular works well because the heat reacts with the body’s water molecules to improve blood circulation and heal soft tissues faster. This helps reduce inflammation and pain associated with carpal tunnel. Keeping your hands and wrist warm also goes a long way to preventing carpal tunnel and managing its symptoms in the early stages of the disorder.

Other treatment options that your healthcare advisor may suggest include massage therapy, ultrasound therapy and acupuncture. Chiropractic care is also an option you may wish to consider. A study has found that doing yoga twice a week for eight weeks can produce significant pain reduction.

Some patients have found it beneficial to train themselves so that their movements are less likely to irritate the median nerve. Regular stretching of wrist and hands can also produce benefits.

In some cases medicinal drugs can be employed to ease the pain and swelling associated with carpal tunnel syndrome. For example, non-steroidal anti-inflammatory drugs, including aspirin and ibuprofen, can provide short-term respite for the patient. However, there is no evidence so far that these drugs are effective in the treatment of carpal tunnel syndrome itself.

Patients with mild or intermittent symptons can also use prescription medicines such as corticosteroids or the drug lidocaine. These medications will act to reduce the pressure applied to the median nerve but may also have other unintended side effects.