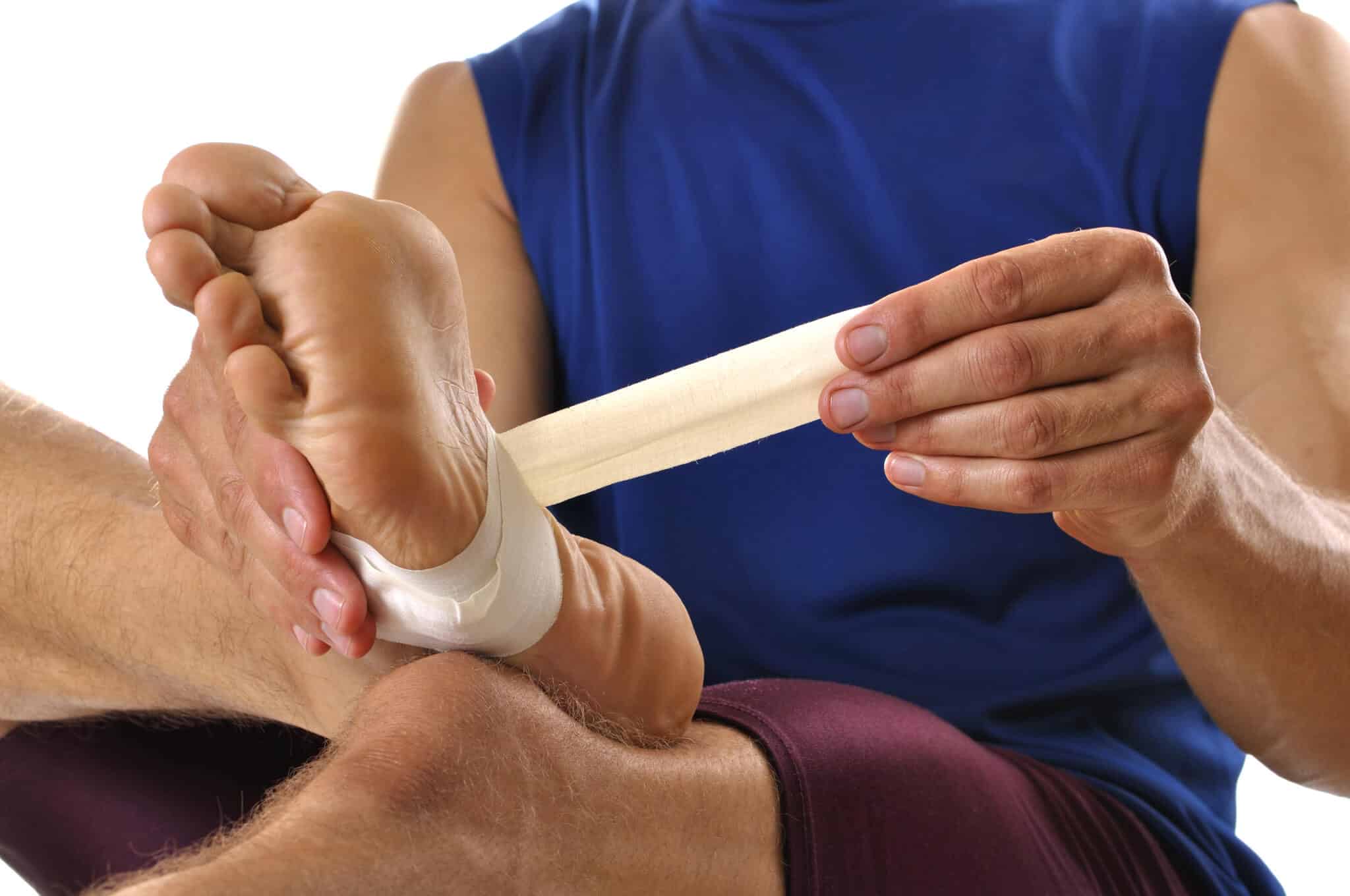 Athletic taping is the practice of applying tape with compression qualities to certain parts of the body to stabilize the relative positions of bones and soft tissue structures (muscles, ligaments) during athletic activity. Athletic tape, of which there are several different varieties, can serve diverse purposes and can be used by athletes or active individuals at several points during injury recovery, rehabilitation, training and competition.

The overall goals of athletic taping are to restrict the motion of an injured joint, to compress soft tissues for swelling reduction, to provide support to the injured body part (and the structures around it), to act as a splint, to guard against re-injury, to promote recovery and to improve performance. Although there are many different types of athletic tape, we can generally divide them into rigid and elastic varieties, each with their own purpose.

The following are four specific scenarios in which athletic taping can directly benefit athletes and allow them to progress toward full health, maintain full health safely, effectively and efficiently, and maximize their athletic potential and performance.

Athletic taping can help stabilize and secure the ankle and surrounding structures to protect it from rolling inward during activity, which puts athletes a greatly increased risk of an ankle sprain. Athletic tape, both elastic and rigid, allows the foot, ankle and leg to move freely, but works to limit the the ligaments, muscles and joint from rolling too far inward by keeping all structures stable and compact, especially during times of elevated movement, quick changes in momentum and direction, and high levels of stress.

This is especially important for athletes that run a great deal or pivot during training or competition, such as long distance runners, basketball players, volleyball players and soccer players. Athletic taping is a great, lightweight and flexible alternative to ankle bracing in these scenarios, as it provides adequate stability without limiting full range of motion. The compression qualities of athletic taping also allow for increased blood flow through the foot, ankle and leg, limiting the severity of any injury that may occur during activity.

Athletic taping can offer many small benefits to those who focus on weight training. These benefits, when combined, add up to provide increased stability and efficiency to prevent injury and maximize gains. Additionally, athletic taping is lightweight and can be adjusted to the needs of the individual user, making it even more effective to both those new and experienced with weight training.

Athletic tape can help secure the elbow, upper arm and shoulder. Not only will this provide compression and support to the various, important structures used in lifting weights, but it will make a slight, but noticeable improvement in your bodily mechanics that will yield positive results.

Studies have demonstrated that athletic taping can help weightlifters gain a greater awareness of their shoulders, elbows, biceps, triceps and chest muscles. Having a better feel for the positions of their muscles and joints and how they are moving from start to finish allows weight trainers to improve technique and use their energy more efficiently. It also helps them avoid injury by allowing them to sense incorrect movements and correct them before injuries from overuse or improper technique occur.

Athletic taping can help athletes to more quickly rehabilitate a knee injury, such as an MCL sprain and can also assist them to reduce the risk of re-injury once they are back in the game. The main purpose of utilizing athletic tape after a knee injury is to restrict undesired motion, such as the twisting of the knee or even unwanted stress on the injured ligaments or muscles. Adhesive, rigid sports tape (e.g. Leukotape) is generally the most appropriate for this use, as it does not allow the injured knee to stretch outside a specific area and thus aggravate the injury.

Athletic taping can also play a role in the later stages of injury recovery, either in conjunction with a knee brace or on its own. It provides compression to reduce swelling and pain, allowing athletes to perform exercises with increased range of motion and strengthen the structures around the injured area.

In the later stages of injury recovery, athletic taping can assist in securing the almost-healed knee to prevent any tweaking or re-injury upon re-starting an activity, such as running, skiing, football or a similar sport.

Fine-tuning A Kick, Swing, Throw or Other Movement

The use of athletic tape in strategic areas of the body has been shown to improve proprioception. This is the body’s ability to sense where it is in space, its position, the motions it is going through, and its equilibrium. For example, even if you are wearing a blindfold, you still know when your hand is above your head.

Proprioception is incredibly important for athletes. It influences elements of performance such as hand-eye coordination for golfers or baseball players, dribbling ability for basketball players and the footwork needed to trick defenders in soccer.

Studies have shown that athletic tape can help athletes gain greater proprioception in certain areas of the body by providing increased awareness of a certain muscle group’s movement or place in space during a certain activity, such as throwing a ball or swinging a bat.

A greater understanding of movement during prolonged training can improve efficiency in that movement, leading to better performance. This is why so many high profile athletes have begun using athletic tape in the last few years. In short, athletic tape, when used correctly and across a long time period, can help athletes develop better habits which can lead to better play on the field, rink, pitch, court or diamond.